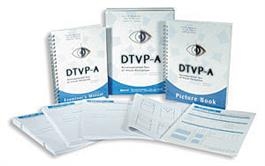 The
DTVP-A is a battery of six subtests that measure different but
interrelated visual-perceptual and visual-motor abilities. The battery
has empirically established reliability and validity. The normative
sample consists of 1,664 adolescents and adults residing in 19 states;
demographic characteristics approximate the current census data.
Evidence is provided to show that the test is unbiased with respect to
gender and race.

The DTVP-A is the latest test based on the work
of Marianne Frostig. It can be administered by psychologists,
neuropsychologists, occupational therapists, physical therapists,
regular and special educators, and diagnosticians who are interested in
examining the visual-perceptual status and visual-motor integration
skills of adolescents and adults.

The DTVP-A is especially
useful in the evaluation of the neuropsychological integrity of TBI and
stroke patients where right-hemisphere function may be at issue. Normed
through age 75, the DTVP-A has sufficient floor or easy items to allow
accurate assessment of even individuals with severe TBI and other
neurologically impaired individuals. The reliability of the various
subtests and index scores indicates that the DTVP-A will be sensitive to
improvement over the course of treatment.

The subtests and
indexes also will suggest areas of emphasis in cognitive and fine motor
rehabilitation. The DTVP-A is particularly useful in distinguishing true
visual-perceptual deficits from problems solely with complex eye-hand
or perceptual-motor actions. The DTVP-A may also assist in differential
diagnosis of various of the dementias in elderly patients, providing a
baseline for normal aging changes in perception and perceptual-motor
skills against which the referred patient may be referenced.

Composite Scores or Indexes
The most reliable scores for the DTVP-A are the indexes. These scores
are found by adding the standard scores of the subtests that comprise a
composite and converting the sum to an index.

Special Features of the DTVP-A 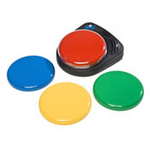